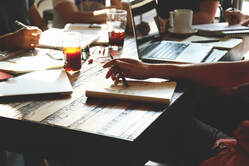 Exploitation working group
​
The Exploitation Working Group (EWG) is a unique platform for cooperation and collaboration between AQUA-FAANG and relevant stakeholder groups including the aquaculture breeding and other relevant industry that would uptake the results of the project. The group will have three physical meetings to broadly discuss the possibilities for uptake of project results, and giving opportunity for non-academic stakeholders to shape the direction of the project.

Thomas Moen and Tim Martin Knutsen are respectively Genomics Manager and Genomics Researcher at AquaGen, one of the leading salmonid breeder and salmonid egg producers in Norway.

​Håvard Bakke is Director of Business Development at Benchmark Genetics BG, a breeding company working with Atlantic salmon, shrimp, tilapia and other species.

​Sigbørn Lien is Professor of Genetics at the Norwegian University of Life Sciences (NMBU) and AQUA-FAANG Coordinator. ​

​Ian A. Johnston is Chief Executive Officer at Xelect Ltd, a leading genetic service provider for the global aquaculture industry with customers across the Americas, Europe, Africa, SE Asia and Oceania.

Serap Gönen is a geneticist at Mowi, the largest Atlantic salmon production company globally. Mowi has headquarters in Norway, but has both breeding programs and production sites globally. ​

Romain Morvezen is a geneticist and breeding program manager focused on genomic selection at SYSAAF, a non-profit professional association working with 34 private breeders in the domains of selection and genetic management of broodstocks.

Marine Claire Herlin have been working at Culmarex for over thirteen years as a responsible for the company’s bass and bream breeding programs. More recently, Ms Claire Herlin also started to actively participate to the North American Atlantic salmon breeding program ran by CookeAqua Inc. (Culmarex parent Company) on the east coast of Canada. Through its participation to the EU funded AquaFaang project, Culmarex aims to significantly increase its knowledge in the field of genomics and, ultimately, apply some of these newly developed tools in its breeding programs.